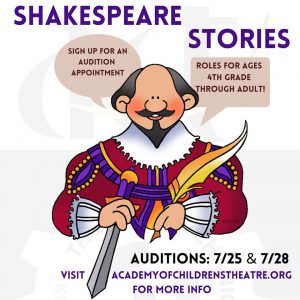 The Academy of Children’s Theatre and The Rude Mechanicals are proud to partner up to present this fun showcase of William Shakespeare’s Stories! ACT and The Rude Mechanicals will connect the dots of Shakespeare, fairy tales, and many modern stories! This new scripted production will bring together some of The Bard most famous words with some of your favorite stories!

Please Note:
– This is a digital production you will be emailed a link on the day of streaming eligibility.
– You will be able to view the production any time between October 1-31 2020.
– The link is good for one viewing, if you’d like to view the production again, we ask that you please purchase another link.
– There is no sharing of the link allowed either publicly or privately. ACT reserves the right to no longer sell future links or tickets to violators.
– All sales are final. There is no refund for unused tickets, we do allow exchanges within the same production.
– ACT does not allow reselling and scalping of our tickets.
Info & Tickets: https://app.arts-people.com/index.php?ticketing=aoct

END_OF_DOCUMENT_TOKEN_TO_BE_REPLACED 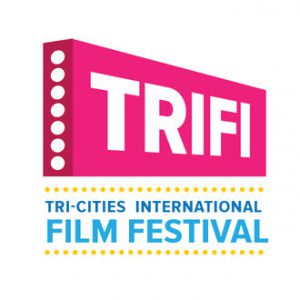 As a part of a rapidly growing Northwest independent film community, TRIFI has screened more than 1,500 independent (Indie) short and feature films from around the world over the past twelve years. This year’s festival garnered more than 130 film submissions from nearly 20 different countries. Films to be shown include independent award-winning feature films, documentaries, music videos and shorts in the Sci-Fi, Animation, Horror, Documentary, Comedy and Fan Film genres.

END_OF_DOCUMENT_TOKEN_TO_BE_REPLACED

WSU Tri-Cities presents “The Community Classroom: Race, Equity and Engaged Citizenship” as a means for engaging with our local community in this important learning process of building racial literacy. We believe that together we can become a community that is more empowered to lead anti-racist efforts. We commit to doing this by investing in establishing a shared understanding of who we have been and who we want to be around race relations in our community. Please join us in learning from esteemed WSU faculty and friends of the university as we go back to school to be better neighbors, leaders, and citizens and invest in developing a culture of anti-racism in the Tri-Cities.

The following topics will be presented:
– History of Civil Rights in the Tri-Cities Past and Present – September 30 starts @ 4 p.m.
– Digital Dissensus: Discovering Truth in an Era of Misinformation – October 22 from 4 p.m. – 5:15 p.m.
– Dismantling Racism: The Game of Change – October 29 from 11 a.m. – 12:15 p.m.
Event details & Registration: https://tricities.wsu.edu/diversity/community-classroom-series/